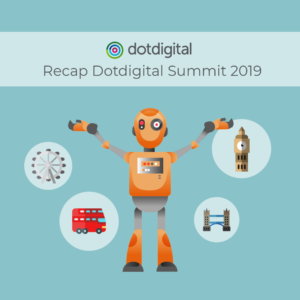 The name Dotdigital is less well known in Germany so far. One of the reasons for this will be that Dotdigital has only existed as a brand since the beginning of this year and previously operated under the brand name "Dotmailer".

With Dotmailer you automatically connect to a newsletter service, which is available like sand on the sand. Dotmailer's product portfolio, however, has evolved far beyond that of a pure newsletter service and much more into an omnichannel marketing automation solution driven by artificial intelligence. Because of this the very extensive rebranding to Dotdigital was carried out and the new lineup was presented last Wednesday in London.

With Pixup Media, we have been one of the first partners in Germany since last summer. At that time still Dotmailer, I followed the invitation to London from Dotdigital very gladly.

The cargo was loaded into the London Docks, more precisely into the Tabacco Dock. I have to admit that I have hardly been able to get to know comparable event locations like these before. From the outside it looks like a bunker and as soon as you enter you are filled with warm light, which is refracted by the bright brick walls. A great atmosphere! 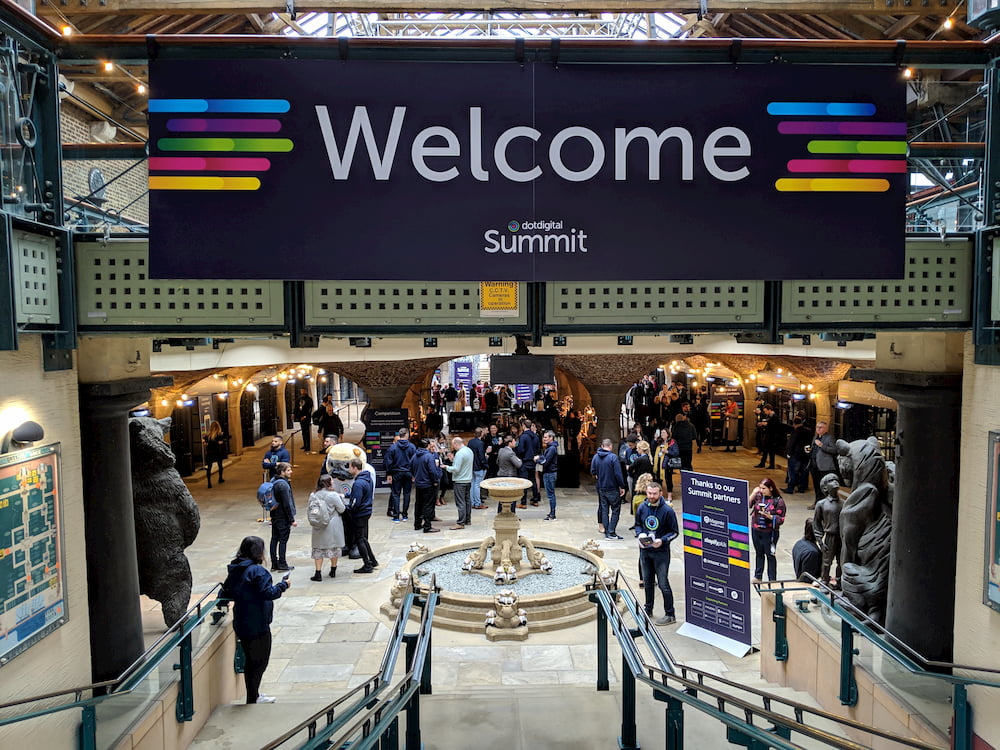 Above all, the contrast between the noticeable history of the Tabacco Dock, which for a long time served as a tobacco transshipment point, and the innovative Dotdigital programme have created a very special atmosphere. 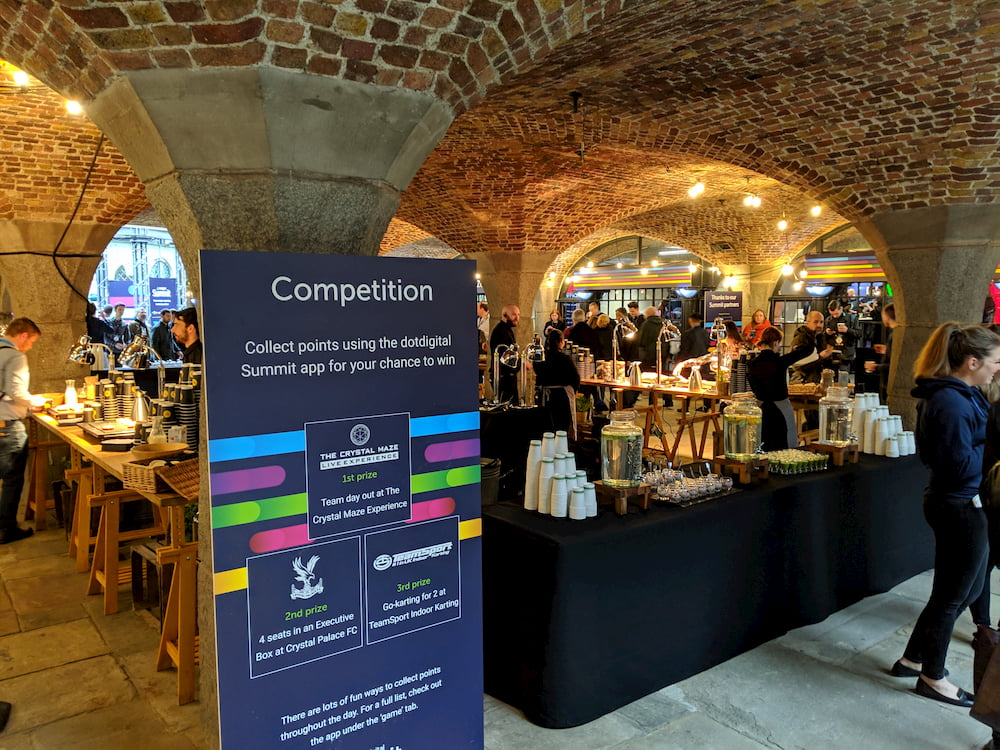 The Summit was now the first big event of Dotdigital, after the rebranding of Dotmailer. Even then, people always tried to point out that Dotmailer is more than just e-mail. Just because of the name, it was hard. The rebranding alone would not have been enough to get rid of this "e-mail feeling". But with the new Dotdigital engagement Cloud it quickly becomes clear what a heavyweight in marketing automation we are facing.

Overview of the new Dotdigital features

That the Dotdigital Engagement Cloud has originated from an e-mail service is obvious. But in an extremely positive way. The medium e-mail is still very important and above all continues to work very well. However, with the following roadmap it becomes clear that with Dotdigital you can reach your customers wherever they are. 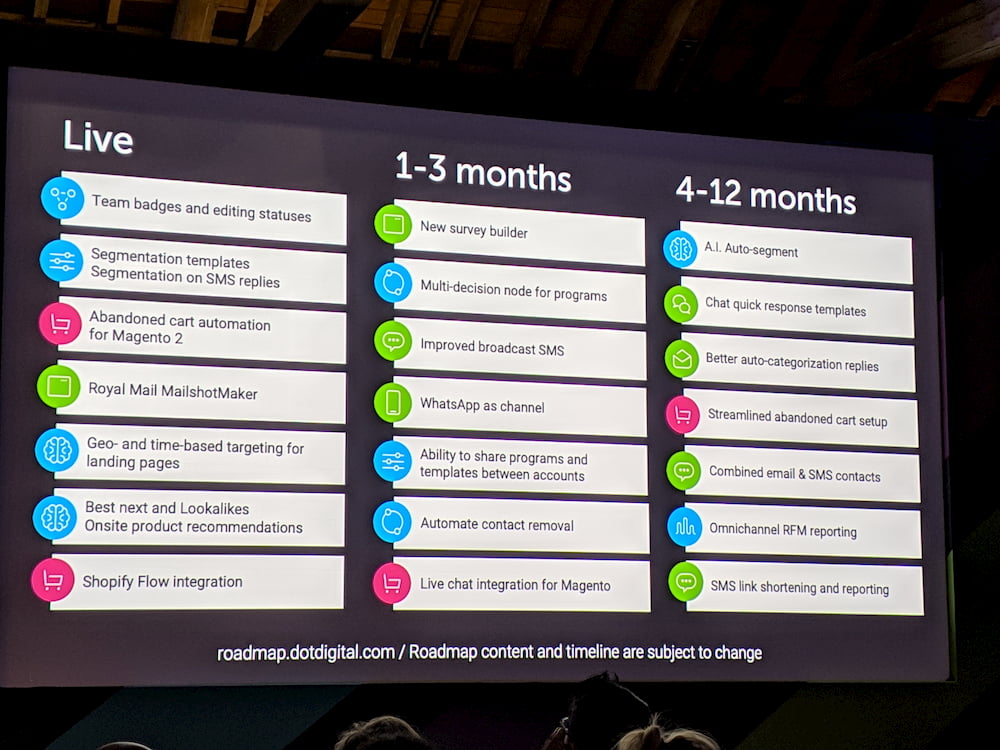 Thanks to the new segmentation templates, segments can be easily created, making it possible to set up an automated and, above all, personalized campaign in minutes. Let's take the case of the abandoned shopping carts. There is a segmentation template that makes setting up such a campaign easier than ever before.

Really surprisingly I found Onsite Recommendations and also the Chatbot, which was first introduced only for Magento. Both technologies have left a very advanced impression. But it makes sense, especially with the recommendations. After all, the data is already available for the e-mails, so that personalized product suggestions can be sent. This can now also be used directly in your own shop.

Not surprising but not less noteworthy is the Whatsapp integration. Up to now, in Dotmailer times, the focus had been very much on SMS as a channel, but nowadays this is no longer the measure of all things. Product-based ads campaigns for Facebook and Instagram can also be seen as a logical step. Here, too, the segmentation and the recommendation have an impact.

In general I was impressed by the Dotdigital CTO Steve Shaw. He is the driving force in the Dotdigital team for the entire and very extensive AI strategy. Artificial intelligence is already a real game changer in marketing today and he ensures that these innovative technologies are put into an easy-to-use product. He also personally showed a view of the AI based car segmentations on stage. Very exciting!

We at Pixup Media are convinced that the Dotdigital Engagement Cloud does not have to hide from more established marketing solutions in Germany. On the contrary!

As Dotdigital and Spryker partners, we see great potential here in the combination of both solutions. Because of this we decided to develop a Dotdigital Connector for Spryker.

AI in E-Commerce Podcast (German only)